Apartment Status and Some Creativity Here's the apartment progress. Deck is going on, windows going in, very fun!﻿ 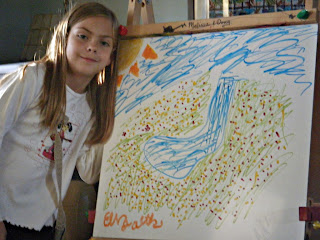 Ellie and Isaac have been doing some whiteboard pictures. Since we don't have a place right now for school supplies during the remodeling the easel (among other things) is sitting in the livingroom. Apparently a new location gets the creative juices flowing. 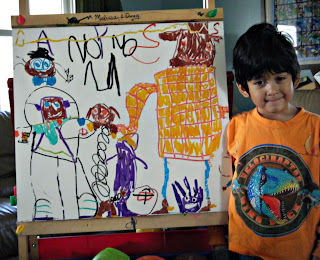 And here's Isaac's. This one is Toy Story themed. There's been a lot of that lately. WhooHoo! This is my new toy. I found this loom on Craigslist for a very good price and snatched it up. I have dreamt of weaving since I was a child and would see my Great-Aunt Hazel's loom that sat in the middle of their living room. Now I am figuring out how. I've already taken it apart and put it back together once because that's one of the ways I learn . The other is with books. I've been studying, and will be ready to try it as soon as I get a couple of needed accessories, like a shuttle.
Oh, and I still need to find a place for it. Right now it's in the kitchen!
Posted by Carol at 7:52 PM No comments: 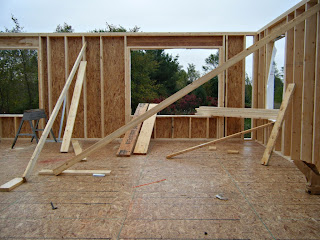 Here's Mom's sitting room window as seen from the general kitchenette area. Since this was taken, most of the partitions have been put in. They're going to try to place trusses again on Monday. They tried earlier this week but the area once known as our front yard was too soft with all the rain we've been getting. The lift truck got stuck twice.
Yesterday I suggested to my DH Tom that when Mom visited later she may want to crawl through the house window with the kids and I so she could walk around the apartment with the partitions in. He thought I was nuts, that she would be too "frail" to do so. I mentioned this to her and that was all it took. She must have considered it a challenge, and promptly crawled through the window. It was fun getting a feel for the space. She had some silly fun with her grandchildren too, practicing living there. 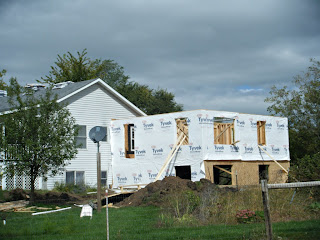 Here's the view with her porch entry door on the left, sitting area in the middle, and a bedroom window on the right. The basement will be mostly unfinished except for a bedroom for Isaac, which replaces the bedroom that had to be removed for the addition. 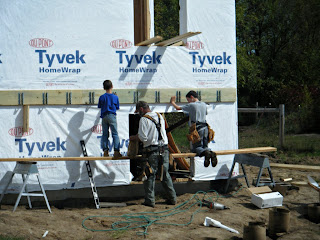 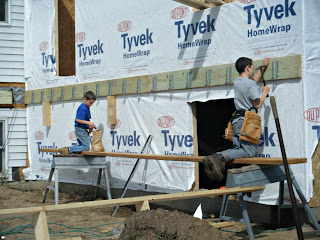 Footings and Beginnings of Walls

Catching up on my documentation of progress here. 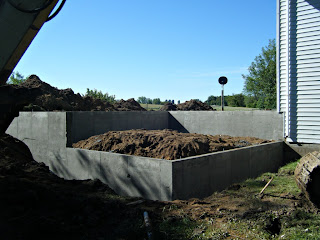 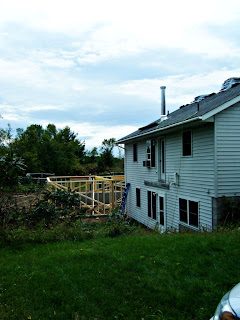 Walls began going up this week. First the basement walls. 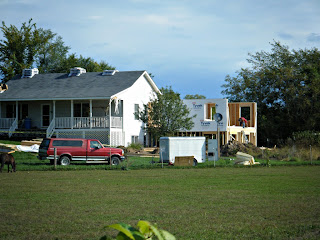 Here's the first glimpse of Mom's main level apartment!
Posted by Carol at 1:30 PM No comments: 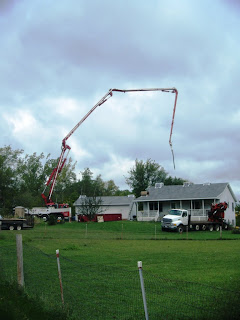 We had quite a crowd here today. A few cement trucks, roofing materials delivery, Porta-Potty delivery, dumpster delivery, and this giant insect-like arm unfurled itself, stretched over our house and vomited cement into the prepared foundation wall forms. There was a guy standing on the ground controlling the thing with something that looked like a large joystick. (Gamers, there's a career option for you!) One false move and we could have lost a roof - not that I expected it. These guys really know what they're doing.
Our yard is a mess. It was a rainy week, a cement truck got stuck, and it's pretty amazing how bad it looks right now. Oh well, no surprise there. 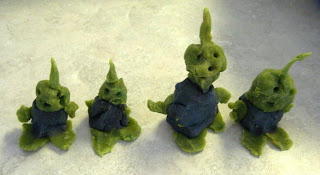 On the home front: Little Isaac's current obsession is the "Toy Story" movies. He has made it his goal to create any characters that are missing from his collection. These are the alien toys. He struggles to get the colors just right, and mixed homemade play-dough blue and red to try to get purple. He was dissatisfied with the result, but I think they are really cute!
Posted by Carol at 10:14 PM 1 comment: 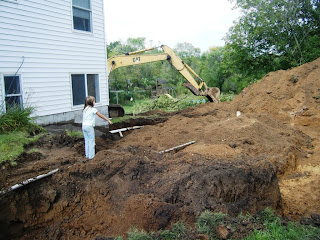 The "Dirt Guys" were out here today and dug the hole for the basement and footings under Mom's apartment. It's a relief to be starting. It has been such a long wait and we're finally seeing something tangible. The pipe you see in the foreground is the electrical line running out to the barn. The larger pipe further back close to the Track-Hoe (That's what I'm told those digger-thingies are called) is our septic line. They hit it while digging. Oops. I'm sure they didn't enjoy that at all. That's a brand-new shiny white pipe repair there. They were working on it when we got home.
The kids and I spent a few hours today with my sister and mother at Home Depot, picking out flooring, cabinets, counter tops and lighting fixtures. None of us are big shoppers, so we ramrodded through as quickly as we could. Mom is keeping most of her furniture so we worked on integrating some of her colors and selected this rug over hardwood flooring for the living room. We were very pleased with what we found. 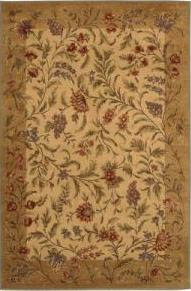 I will go back tomorrow or Saturday and actually order the cabinets, counters, and flooring that we selected.
We are told that the foundation block will be laid beginning first thing tomorrow morning. Yay!
Posted by Carol at 9:59 PM 1 comment: 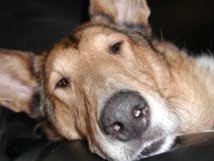 Carol
I am a Christian stay-at-home mother of four who homeschools my two youngest children. We live in the country, 10 miles from town. I "retired" in 2006 from a great job in technology. I miss the gadgets, but am happy to be home with my kids. I am an OBSESSIVE reader! Books, magazines, blogs, cereal boxes, anything.

A few of my favorite blogs